Mobile phones have long since become an integral part of our lives, and the very idea of ​​staying away from them in us is beginning to cause mild panic and fear. 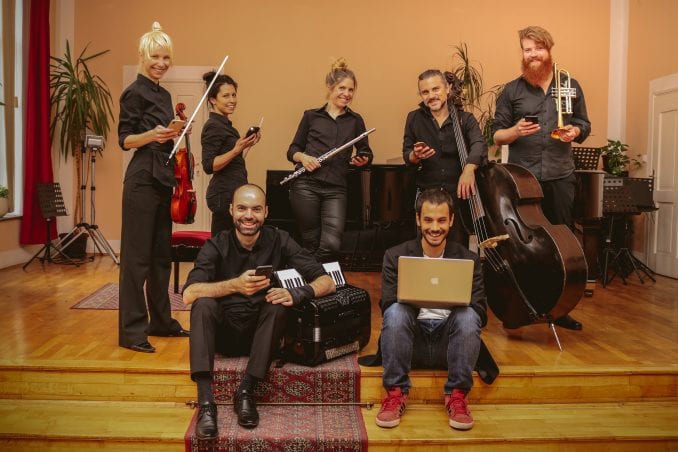 With Maja Bosnić, the initiator of this project and the composer of the first such concert in the world, we talked about what you can do with the phone when you are on the stage, how the audience can join the concert as well as how it looks when one orchestra merges with the mentality: Serbia, Colombia, Poland, Palestine and Indonesia.

Where do the phones in the concert, do not they disturb us to completely let the sound?

Today, we all rely heavily on mobile phones in our everyday life. If you think, it’s so much easier and enabled thanks to phones. There is some general thinking that phones are alienating us, and I think it’s completely the opposite. I think that the nature and the flow of modern life are alienating us, and thanks to the phones we only manage to be in contact with all the dear people. We no longer have to remember the numbers, dates, addresses, and it’s good to have the device that works for us, because that just means we have more room for creative brain work, which is great. Well, when phones participate in almost every area of ​​our modern life, why not see how they can improve and upgrade their music performance?

What can you do with the phone when you’re on the stage?

How is music written for smartphones?

Each time it is re-examined and studied, depending on how the phones are used. In The Upgrade, musicians constantly look into their phones as if they were in the waiting room so that they can only hold and play their instrument with one hand. That’s why I first spent time with the performers in trying out all possible available sounds, effects and tones that one could perform with one hand. Only after collecting this information and sounds, I began to really make a musical composition, which you will hear at the concert. According to a similar principle, I first prepared the field before writing music and for the other composition Đcom.app.data. I decided to want a composition that can not be performed without the use of several free mobile applications, so I spent several weeks in downloading various applications, testing, analyzing, so I sorted them into categories important for music performance: applications that produce sounds, applications that conduct, applications that record and play sounds and games that have interesting sounds. Finally, I made my selection of several applications and started writing the composition with all the instrumental work. So, in my case, if you write compositions that will use phones, it is necessary to create a material plan in advance, then you get to know it well and then start writing.

How and how much this concert was produced and what exactly the audience will hear in the Philharmonic?

Nearly a year has passed since my first idea for such a program. In September last year, I have already started rewriting with other composers about adjusting their composition to mobile phones, sending notes and materials for preparation. In the meantime, some new compositions were created, and so everything slowly fit into a larger story. Beside me, the ensemble is great professional musicians, including: Jelena Vujnović (flute), Jovan Savić (trumpet), Branko Džinović (accordion), Tamara Marinković Tomić (viola), Boban Stošić (double bass) and Arsenije Savić / video materials). At the concert in the Belgrade Philharmonic, we will perform compositions by both domestic and foreign contemporary authors: Jennifer Vols – Volunteer Chorus, Andrea Andric – One Bit Flow, Johannes Kreidler – Steady Shot, Maja Bosnić – The Upgrade, Maja Bosnić – Đcom.app.data,

The program is also the music of the 4 ©phones Collective. How does the composition of the composition look like when it comes to mentalities: Serbia, Colombia, Poland, Palestine and Indonesia?

It’s a very interesting story. At the beginning of this year, I was selected to participate in MusicMakers Hacklab, led by Peter Kirn, along with 20 other international artists, different backgrounds and professional orientations, and prepare performances for the final evening of the famous CTM festival in Berlin. Immediately during the introduction and presentation, I said that for two years I have been working with phones in music performances and that I want to make a performance in which the audience participates by playing their phones. A little later, Hasan Masni, an engineer and programmer from Palestine with a residency in Stuttgart, approached me and wanted to hear more about my idea, so we began to think about possible technical solutions: how it would look like an audience application, how it would sound I would use the sounds for her, so that clicks communicate with the server and are later formed into a more interacting with us, the artists on the scene. Then Juan Olai of Colombia joined us with the exact idea of ​​how to encode this web application and additional live visuals during the composition. Tomi Herset from Indonesia brought a great opportunity to spatialise the sounds that the audience produces in the hall, and Justina Stasiovska from Poland made great recordings of metro sounds in Berlin, which served as a sound pad for all these other elements in the composition.

How will the audience be able to use their phones at the concert?

So in the composition of David Helbih, the audience will get instructions to release some content from the YouTube app, reduce the phone’s power to 10% and put the phones on the floor in front of you. So we will get rid of it, shrinking and shining under the pace of which each participant will be a partial creator. While in the composition, the Menuet4phoneS audience will perform almost the entire composition by using their phones and accompanying video instructions. Whoever is curious, will be able to download free applications that are used in one of the compositions and are additionally interested at home. What is very important is that we will inspire people to be more creative in the use of their phones and life in general. Art is the only area in which technology can not replace a man in the future, in this way we use everyday technology to awaken artists in every individual.

Where will the “smart” telephones sound after the Philharmonic?

During the summer, we are waiting for the organization of the next tour, so we will just see where we will all arrive and where everyone will hear the phone roars from our concert. We expect performances at festivals of new music, sound of art, interactive performance and new technologies.